The Starting Point of Civilization

Shedding Light On Today From 12 Thousand Years Ago

It is 7 thousand years older than Stonehenge in England, and 7 thousand 500 years older than the Egyptian pyramids... Believed to be a belief center about 12 thousand years ago, Göbeklitepe is an archaeological treasure that has not been discovered adequately yet. Located approximately 12 kilometers northeast of Sanliurfa on Tek Tek Mountains, Göbeklitepe is a part of Mesopotamia, the geographical region which is known as “Fertile Crescent” or “Golden Triangle” and blooms by the rivers Euphrates and Tigris. “Fertile Crescent” is the starting point of the neolithic revolution which is one of the greatest progresses of humankind, which is germination of the first wheat, domestication of the animals, transition to the settled life by the first villages established, partially formation of classification, invention of writing, the starting point of civilization in brief. 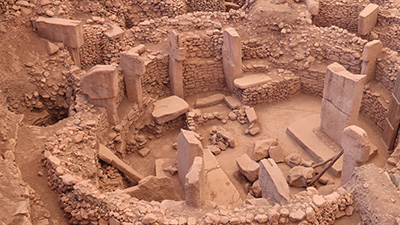 Last Hunters Of The Stone Age

Göbeklitepe, which is a result a great organization and imagination, is the oldest monument of this size; it constitutes the zero point of history in many aspects. At the time when Göbeklitepe was built, people used to live in small groups collecting plants and hunting animals. The people, likely to be for the first time in history, had to stay together in such a crowded manner to bring the huge columns and heavy stones from rocky areas to Göbeklitepe by carrying those 2 kilometers without any handcarts and draught animals

The Mystery Of T-Shaped Stones

The excavations ongoing at Göbeklitepe ruin has always witnessed unexpected discoveries. Building of temples, which required advanced architecture, in the stone age that is called as “neolithic age”, where people maintained their lives as a hunter-collector, has surprised whole world. Further to that, the temples, which were enriched with animal figures on T-shaped obelisks reflecting the belief world of prehistoric people, made Göbeklitepe one of the most important discoveries in archaeological history. As well as its impressiveness, all data and scientific results to be obtained about the prehistoric life during excavations are of great importance for human history for sure. 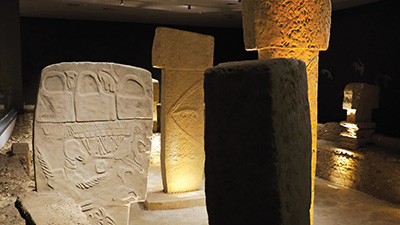 An Excavation Rewrites The History

While it has been thought that monumental structures could only be built in the advanced stages of settled life until now, Gobeklitepe shows that this thought is not correct and that this period has a very complex social order and technology. It suggests that there are still much more to be discovered. The surprising fact revealed by the findings obtained from the excavations carried out by the German archaeologist Klaus Schmidt, who devoted the last period of his life to Gobeklitepe and passed away in 2014, and his team is that Gobeklitepe is an extremely magnificent cult center and a mountain of temples built by the last huntercollector communities of the stone age. Being in the eve of a major change, the hunter-collector communities, who suffered from all difficulties of the transition period, have at least sort of settled down by their temples. Moreover, by having a world of symbols and belief system that can be considered more advanced and complex than we think.

The architectural structures in Gobeklitepe are cult structures built not for daily life, but for special purposes. Nevali Cori, Karahantepe, Sefer Tepe and Cayonu located in the same region are assumed to be smaller settlements of the same culture. Gobeklitepe was used during the Neolithic age and then abandoned. The monumental structures were filled consciously by the people of the Neolithic period, who built it, and were sort of buried in a way. For this reason, the mountain of unique temples, which was the meeting point of the last hunters, has survived until now in a deserted, divine, silent natural environment without being destroyed. Six structures have been unearthed so far in Gobeklitepe, where 20 sections that are thought to be temples were found. A new era has started in Gobeklitepe, which has been added in the World Heritage List of UNESCO in 2018, with respect to preservation and the fact that the scientific excavations will be carried out in a better and much more organized manner.