The Most Important Port City on the East Coast of Lycia: Ancient City of Phaselis

One of the numberless ancient cities in Antalya, which is one of the precious cities in our country that brings together many civilizations from past to present, Phaselis, the ancient Lycian city, is engraved on minds and hearts of visitors with its pure beauty and unique nature in Kemer district of Tekirova. Located 16 km west of Kemer district today and founded as a colony by the Rhodians leaded by Lacios in 690 BC, this city reflects cultural heritage in the shade of green cedar and pine trees, which have refreshing smell, and impresses with the generous geography, which allows you to enjoy both picnic and sea. 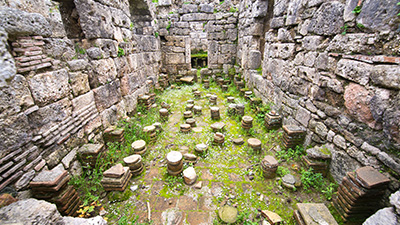 Phaselis is a chance for Antalya. Fascinating hundreds of domestic and foreign tourists every year with its unique nature, this region was founded on a peninsula. The famous port city of Ancient Age, the Ancient City of Phaselis was founded as a colony by Rhodesians in 690 BC because of the presence of three different ports, its location and proximity to rich forest areas. Located among pine and cedar forests in Olympos Phaselis Bey Mountains National Park Ancient City, the Ancient City of Phaselis is one of the precious locations where green, blue and ancient ruins embrace each other.

An ideal destination for those who want to escape from the chaos of the big cities to relax their souls in an untouched nature and enjoy the sea with every shade of blue and turquoise, Phaselis is a paradise that is famous for its ancient city, eye-catching bay, beach and untouched pure beauty in the town of Tekirova in Kemer, Antalya, the pearl of the Mediterranean region. The deep blue water, which is overshadowed by historical ruins, aqueducts and columns, forms the heart of a holiday destination, embracing the warm sun of Mediterranean. Offering a privileged vacation opportunity for those who are also interested in history and archaeological ruins, Phaselis is ideal for those who want to enjoy a calm and peaceful vacation.

Adding an extra value to Antalya, Phaselis's borders end at Gokdere Valley in the north, Uc Adalar and Tahtali Mountain in the south, and Candir Valley in the west.

Located at a close distance to Tekirova, which is about 12 km to Kemer, this port city reveals the concept of city planning in ancient times through its ancient theater, agora and baths, and it also acts as a bridge between times and civilizations. If you prefer Phaselis for vacation, you will enjoy the unique experience of swimming in deep blue water along the ancient ruins, losing yourself in the shadow of the water hitting the columns and stone blocks under the red sky in the evening and relaxing your soul.

The original appearance of the ancient city of Phaselis shows up through the magnificent ancient ruins and blue sea, which are visible after the asphalted road of 2 km long, which is surrounded by trees. The area called as North Harbor is visible right after the Necropolis, i.e. the tomb and temple ruins. The North Harbor between the necropolis and the aqueduct path is one of the three harbors of the ancient city.  The others are Center Harbor and South Harbor. One of the most important parts of Phaselis is the ruins of the baths around the Ancient Aqueduct. The others are Hadrian's Gate, Domitian Agora and Hadrian Agora at the opposite of the Ancient Theater. South Harbor and Hadrian's Gate face each other, whispering each other the history being witnessed. With a capacity of 1500 people and surrounded by green nature, Ancient Theater of Phaselis is a reliable and trusted evidence of history. Like all ancient cities, Phaselis blends the mystery of the ancient times with the energy of the present time, and fascinates every visitor.   When you visit Phaselis Bay once, which shine on a historical stage, where blue and green dance, like a jewelry inherited from ancient age, you will want to come back again. 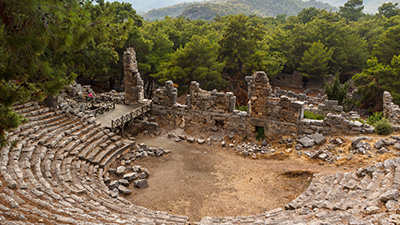 How To Get To The Ancient City of Phaselis?

You need to pay an entry fee to enter this quite, calm and peaceful region,   which is at a distance of 15 minutes to the district of Kemer. To get to Phaselis,   where there is no music sound and where you can only listen to the sound of   nature, from Antalya, take the turn to beach side at the junction located at the   57th kilometer of Kumluca Highway. After turning to the beach and continuing   straight for approximately 1 km, you will reach the magical ambiance of   Phaselis. The signs on this route will also help you.

You may take the minibuses for Phaselis from Antalya, Kemer and Tekirova. After arriving by minibuses to the entrance of the ancient city and buying a ticket from the ticket booth, you can walk to the beaches. Those coming by self-drive can use the parking area next to the beach. You can get to this fascinating area also through Lycian Way.