Take on A Journey to the History of Civilizations, the Ancient City of Side 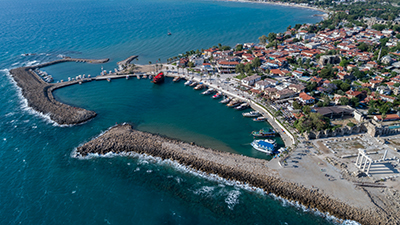 It is possible to come across the traces of numerous ancient cities across Anatolia, which witnessed many different civilizations. Ancient City of Side is one of these. The most important port city of Pamphylia, Side is located 80 kilometers east of Antalya. Founded on a peninsula approximately 400 meters wide, Side became a settlement in the 7th century BC. Dominated by Kingdoms of Lydian, Persian, Ptolemy, Seleukos and Bergama throughout the history, Side then gained independence and marked history. 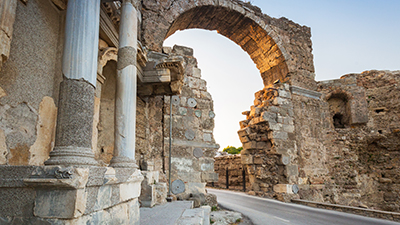 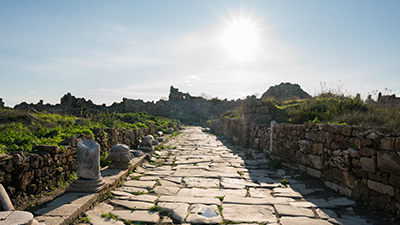 When you enter the Ancient City of Side through the main gate, you will see a monumental street. Starting from the Big Gate, the main street ends in the big square near the temples when you go straight. The other big street of the Ancient City of Side starts from the Big Gate and stretches towards south. The common characteristic of the two streets is that they are both columned. The columns on both sides of the street have Corinthian heads. The shops are lined up in a single row behind the columns. The most important god and goddess of the Ancient City of Side are Apollo and Athena. Inhabitants of Side, who believed in gods and goddesses such as Ares, Aphrodite, Asclepius, Gaia, Charites, Dionysos, Demeter and Hermes, started to adopt Christianity in the 4th century AD. 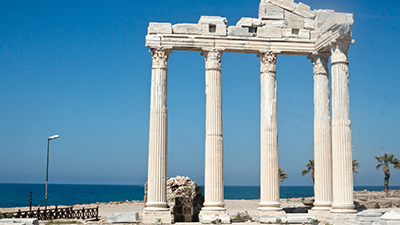 There are two protective towers at the main gate of the Ancient City of Side. These gates became the visual symbols of the city. Nymphaeum, the monumental fountain located directly opposite of the gate, consists of three big niches and nine flowing fountains. The fountain was destroyed by earthquakes, and only 12 meters of the fountain have survived until now. When you follow the road with big columns, you can see the remains and traces of shops, agora, theater, hamam and houses. This road gets you to the city port. The second columned road starts from the left side of the fountain and ends at the port. 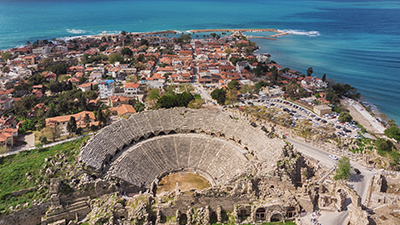 When you go straight in the main columned road, you will see the arch, which still maintains its magnificence. When you enter through the arch, you will see the theater dated to the 2nd century AD. With a height of 20 meters and capacity of nearly 15 thousand people, the theater has a stage building with three floors. Unlike all other theaters which were built with the mountain behind, Side Ancient Theater was built on the arches. Rich in decoration and ornament, the theater also witnessed the Byzantine period. 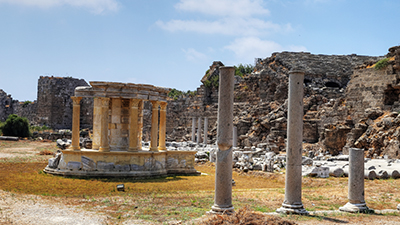 Hamams, the most important architectural structures of the ancient period, also maintain their magnificence in the ancient city of Side. The hamam next to the theater was built in the 5th century AD, and turned into a museum by the restoration in 1962. Hamam consists of Frigidarium , Tepidarium (warm section), Caldarium (hot section) and Apodyterium (changing rooms). It is possible to see the pipes with hot water circulation even today. Another structure next to the  Ancient Theater of Side is the Temple of Dionysus. It was built in the Hellenistic period, but lost its function in the Byzantine period. 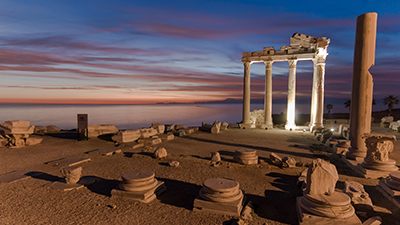 You will see Gymnasium, which is gym, when you follow the columned road lying beside the monumental fountain. The temple of Tyche, the goddess of good luck, is located between the theater and the gymnasium. The temples of Apollo and Athena are identified with Side. You can see the pomegranate trees, which Side takes its name from, when you walk towards these temples. The Ancient City of Side is known by the Temple of Apollo. The Temple of Apollo, the main temple of the city, was dedicated to Apollo, the god of light. The temple has survived until now after restoration, and became the symbol of Side with its 5 columns with Corinthian head. The history of the Ancient City of Side connects to present time by Selimiye Village, which was founded by Cretan immigrants at the beginning of the 20th century.