What do you think about the Turkish Russian Classical Music Festival where you are the art director? How did the idea of organizing such a festival come out? Since the festival will be held at Side Ancient Theater, how do you feel when you think of the festival atmosphere?

The Turkish Russian Classical Music Festival is an excellent project that unites people from different cultures. The idea of organizing the festival came out from Turkish partners who invited “Virtuosos Of Moscow” several times to perform at the International Antalya Piano Festival.

The Turkish Russian Classical Music Festival was held for the first time, and we were very happy that we were responsible for the artistic part. In particular, our group, celebrating their 40th anniversary this year, has years of experience in collaborating with the best soloists of the modern era.

The program selected was amazing, and the festival was a very special and unforgettable event in terms of where it was organized. 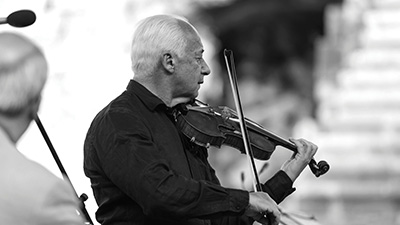 This year has been announced as the Year of Turkish- Russian Culture and Tourism in both countries. Do you think that this festival would contribute to the development of cultural ties between Turkey and Russia?

The festival will help it for sure.

Can you please tell us about festival program?

During a period of three days (May 7, 9 and 11), Anna Aglatova (soprano), the soloist of Bolshoi Theater; Fazıl Say (piano), our old and respectable friend and world-famous musician; Sergei Zhuravel (flute), the soloist of Russian National Philharmonic Orchestra; Nikita Vlaslov (accordion), one of the best accordion artists of Russia will take the stage with us. Denis Shulgin, Georgiy Tsay, Lev Iomdin, Evgeniy Stembolskiy, Vitaliy Khandras, Aleksey Lundin, Evgeniy Shulkov and Aleksey Strelnikov, the musicians of Moscow Virtuosos, will also take the stage. I will appear on the stage not only as a conductor, but also as a soloist one evening.

The aid fund that has my name celebrates its 25th anniversary. We organize master-class, concerts, tours and exhibitions and help children talented in music and visual arts to develop their skills. Children who receive scholarships from the fund attend the international competitions and festivals, as well as competitions and festivals within Russia. The fund provides regular support to music schools, arts and painting schools in Moscow, St Petersburg, several regions in Russia, CIS and Baltic countries. The fund also supports several social programs related to education, science, art and culture. We continue to develop in multiple ways, and the success of our talented children make us happy. I would like to add that we also support child health. We help orphans, children with disabilities, orphanages and hospitals.