Mentioned in the mythology for ages and considered as one of the most important seaports of the Ancient Lycia, Olympus has gained a reputation as the shelter of the pirates due to its convenient ancient location. Thanks to its historical values, unprecedented natural beauties, coastline of 3200 m2, endemic plant species, Caretta Caretta and well-known wooden houses used for accommodation purpose, Olympus is currently the frequent destination for nature lovers.

Preserving its status as one of the most untouched bays of the Mediterranean region thanks to its location at the specially protected environment area, Olympus is situated within the borders of the National Park of Bey Mountains. There is not any seafront facility here, and you can see the remains of the Ancient City of Lycia alongside the beach, which prevents any possible development works across the area. Drawing attention with its wooden lodging houses, Olympus Valley is situated 300-350 meters away from the facilities located near the sea. Surrounded also by the must-see destinations, Olympus is an ideal address for travelers and nature enthusiasts with its environment-friendly facilities! 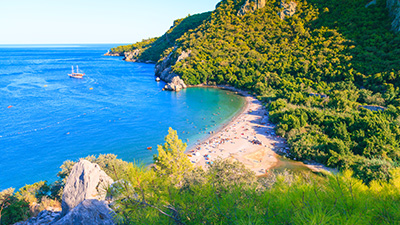 Located on both sides of the river and covered with temples, tombs, historical remains, and vegetation consisting mainly of bay trees and brambles, Olympus faces towards the Mediterranean Sea. The beach, located on the junction of the valley and the sea, will strike you with admiration while the middle age castle, rising on the rocks on the western side of the river and reflecting the last times of Olympus, will offer you the opportunity to watch the unique view of the area.

Olympus Beach, covered with big pebbles making it an ideal spawning place for caretta caretta, is the coastline of the Ancient City of Olympus, and considered as one of the most untouched and preserved natural beauties of Turkey.

Cirali, a locality of the district of Kemer in Antalya and one of the two settlements located on Olympus Beach, is kept under preservation as it is the spawning area of the endangered caretta caretta. Located just behind the coastline and having a dispersed settlement pattern, Cirali has a great number of accommodation facilities.

Located near Cirali, Yanartas has some never-dying masses of fire throughout the year at different points of a volcanic slope. Accessible after a half-an-hour walking on an ancient path, Yanartas has a mythological tale of a creature thought to be fire-breathing even in its last breath in the ancient times. 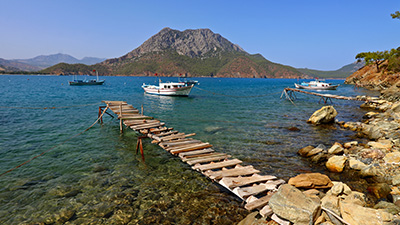 Located within the borders of Kumluca, Adrasan is situated 8 km south of   Olympus. Extending like an arc on the shadow of Musa Mountain as one of the   longest coastlines on the west of Antalya, Adrasan Bay has one of the most   beautiful beaches.

Referred to as the Maldives of Antalya and situated in Adrasan, Suluada is   named after the fresh water source on it. The water source of the island, which   charms all its visitors with its unique turquoise sea water and two different chalk-white sands, is believed to have a curative effect.

Extending for 509 kilometers from Fethiye to Phaselis, the Lycian Way is referred to as one of the most beautiful long-distance walking tracks of the world. Gelidonya Lighthouse, the oldest lighthouse in our country, is located on the Lycian Way. 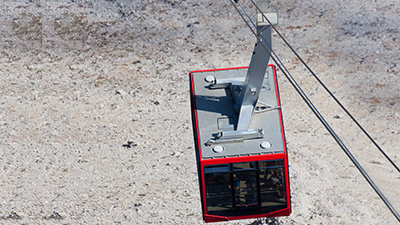 Inspired from the Mount Olympus regarded as the abode of the gods in the Greek mythology, nearly 20 mountains were named as Olympus across the lands of Anatolia and Greece. Situated 2.374 meters above the sea level within the borders of Olympus-Bey Mountains Coastal National Park, Tahtali Mountain was also named as Olympus in the ancient times.

If you want to reach Olympus Tahtali Mountain, you can take the cableway at the point of 600 meters. During this 10-minute tour, you can enjoy the unique view, and paraglide around the mountain. 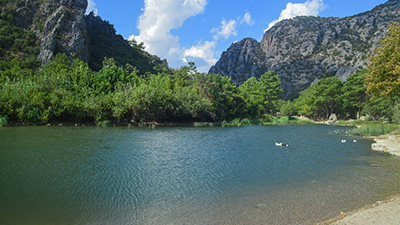 Protected as the national park area since 1972, Olympus Bey Mountains   National Park is situated between the districts of Kemer and Kumluca of   Antalya. The national park includes not only the starting point of Bey   Mountains, but also Olympus, Adrasan, Cirali, Yanartas and the Ancient Lycian   Way.

Having a surface area of 34.452 hectares, the national park also serves as an   important plant and wildlife area. Encompassing nearly a thousand plant   species including 25 endemic plants, the national park is a home to the Mediterranean monk seals and caretta caretta alongside the coastline.

The globally-known wooded houses of eye-catching Olympus are regarded as a tourism model peculiar to Turkey. These completely-wooden houses with many of them used as lodging houses and boutique hotels consist mainly of independent units such as bungalows.