Antalya is one of the cities which come to mind when it comes to Mediterranean. Given its name to one of the most known historical mosques in Antalya that is famous for its neo-classical works rooted in the lands where the spirit of ancient civilizations are still felt, Yivli Minaret attracts attention by its unique architectural design and form. Taken the name Yivli Minaret due to its fluted minaret and located in the city center, this mosque has become one of the architectural symbols of Antalya. Standing out by its unique design when you turn your head towards the sea while walking in the city, Yivli Minaret is one of the most beautiful examples of the Seljuk art.  Yivli Minaret shows up under the blue sky for centuries with a history dating back to the 13th century. Located in Kalekapisi in Antalya and included in a kulliye (an Islamic-Ottoman social complex) together with other Seljuk artifacts, Yivli Minaret is flooded by visitors especially during Ramadan. Kulliye also includes Yivli Mosque, Giyaseddin Keyhusrev Madrasa, Seljuk Madrasa, Mevlevihane (Mevlevi Lodge), Zincirkiran Tomb and Nigar Hatun Tomb.

Being the symbol of Antalya as it is visible from every corner of the city, the bottom of Yivli Minaret is made of square-shaped block stones, while its brick laid body consists of 8 semicylinders. The turquoise tiles have not survived to the present day. 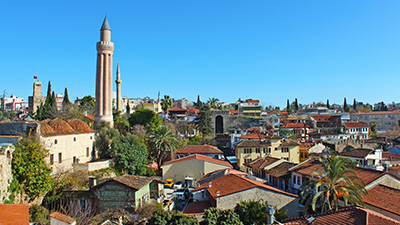 This simple, yet attractive masterpiece is 38 meters high and has 90 steps. The body of the minaret is covered by bricks and turquoise tiles. There are 8 flutes.

Yivli Minaret Mosque, located in Yivli Minaret kulliye, is one of the first Islamic buildings in Antalya. Seljuk Madrasa, known as the ruined Madrasa, is on the right side of the entrance to kulliye and dates back to the 13th century.

The Nigar Hatun Tomb has taken its name from Nigar Hatun, the wife of Bayezid II, and is located in Yivli Minaret Kulliye. Its hexagonal body is covered by a pyramidal roof in Turkish style. There is a marble sarcophagus with an open-top inside the tomb.

Yivli Minaret will be one of the eye-catching masterpieces in your visit to Antalya. This masterpiece, which is now 700 years old and once shined just like the sky by the rich-blue colored tiles on it, still attracts attention as it keeps its position by still preserving its value and story, even though the tiles have not survived. Witnessing silently the history along Mediterranean Sea and magnificent Taurus Mountains over the city, Yivli Minaret, as a location that is loyal to history, proudly proves that Antalya was once among the cities in Seljuk lands.