Antalya has many stone and wooden houses giving a smiling face to all pass-byers on the narrow streets and getting you away from the hustle-bustle and tiring energy of a big city, besides the white modern apartments rising on the both sides of the modern, wide and spacious avenues. These houses, located in the first and historical district of Kaleici in Antalya and turned mainly into hotels, restaurants, leather shops, jewelry shops, antique carpet and souvenir shops, were once traditional houses which witnessed births, deaths, joys of feasts and wedding and other ceremonies.  Reflecting the traces of old times with its historical and original architectural style and expression, Kaleici houses strike all domestic and international tourists with admiration. 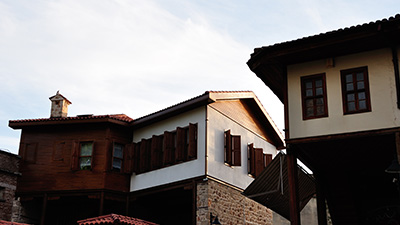 Dating back to the 19th century, Antalya Kaleici houses have a garden with stairs right next to the entrance. The floors of these old but still existing houses are covered with geometrical mosaics, consisting mainly of black and white pebbles, called as the "Rhodes work". You just need to check the floor of a house to say that whether it is an Antalya Kaleici house, or not. These figurative mosaics are both for decoration purposes, and have a structural nature to keep a house cool during hot summer days. Another way of getting rid of the characteristic hot weathers during summer in the Mediterranean region was to plant trees on the house gardens. We have to give credit to the cool sofas inside the houses, as well. The architectural design peculiar to Kaleici houses was to keep the houses cool during summer and warm during winter, and it was realized in highly aesthetical ways.

Serving as not only an architectural but also a visual detail, the columns were made from wood materials. The ground floors of the Antalya houses had a low number of rooms, and they were designed in a manner to catch the daylight from the garden. The upper floors, on the other hand, had an extra kitchen and a higher number of rooms. Since the houses were located closely to each other on the narrow streets, they were cool during summer, and warm enough to eliminate the need for a heating source during winter.

Oriel window was one of the details making the old wooden houses and mansions attractive and special. The upper floors had always oriel windows and a high number of regular windows.

The architectural elements called as timber were used to prevent any crack on the walls, and to make the house stronger. During the fire which broke out on the street of Kesik Minare Mosque in the late 19th century, many houses were burnt, and then it was started to build houses with stones.

The historical process, which comes to life at nearly all points of Antalya that has become a special city for not only summer tourism but also winter tourism in Saklikent, hits the peak in the district of Kaleici. Antalya Kaleici houses invite you to enjoy these calm-natures houses, gorgeous mansions, minarets, castle walls and historical remains, which are rising under the bright sky and covered with orange roofs like a hat, the column bases you can see at every corner, the narrow streets that make you feel in a labyrinth, and the unique feeling of getting lost in these streets. Accept this invitation, and get lost in these historical streets during your Antalya tour. Don't forget to take plenty of photos so that you can always enjoy the life-giving energy of these immortalized historical streets and Kaleici houses.