Antalya is a favorite city of local and foreign tourists not only for its sea and sun, but also for its cultural heritage. Also known as Dudensuyu Cave, Altinbesik Cave is one of the numerous natural beauties and ruins in this country of sun. With its turquoise colored soda water, the cave promises its visitors a visual feast. Known as "Altinbesik" since it resembles a cradle and because of its yellow arches, the cave is an extremely attractive destination for nature tourism. Offering beautiful frames for photography enthusiasts, the cave is at an altitude of 450 meters from the sea. 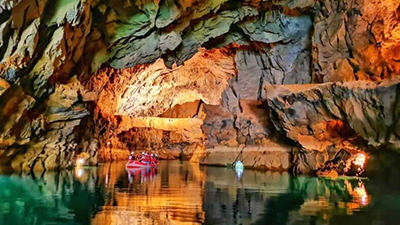 Located in Ibradi district of Antalya, the cave is also the largest underground lake in Turkey and the third largest underground lake in Europe. It was discovered in 1966 during the researches on Oymapinar Dam. Named after Altinbesik hill located on the upper side, the cave is really worth seeing with the stalactites-stalagmites and waterfalls found inside. You can enter the cave up to 400 meters by boat, and discover the beauties of the cave by the lighting inside. The water inside the cave has an underground connection with Beysehir Lake. The researches in Altinbesik Cave are still ongoing. The water comes out of the cave as a result of the explosions occurring in Dudensuyu on rainy days. One of the undiscovered hidden paradises of Antalya, Altinbesik Cave fascinates the visitors with its natural and mysterious state. In Altinbesik Cave, which is the first and only cave national park of Turkey since 1994, 200 meters from the entrance forms the lower level. Drawing the attention of especially nature lovers due to the walking trails and natural beauties surrounding it, Altinbesik Cave can be visited between 09:00 and 18:00 every day of the week.

The cave is at a distance of 167 kilometers from the city center of Antalya. For road transportation, you can use Konya-Antalya highway route. You can get to Ibradi District from Konya-Manavgat highway and then to Urunlu Village and Altinbesik Cave.