Hadrian's Gate with Marble Columns in the Corinthian Style

We are not alone and we are not the first residents on these lands. These lands, which have embraced many different civilizations before us, stand as a living proof of the history, which has been still preserved. Hadrian's Gate is one of those proofs.  It is possible to come across with ruins dating back to ancient times even while walking in the city center of Antalya. Hadrian's Gate, commonly known as “Uc Kapilar”, takes you to the past with its elegant stance and strong structure.  Located also at a close distance to Kalekapisi, Hadrian's Gate is almost 8 meters high.  It has columns in Corinthian style, and composite order capitals. Built in the name of the Roman emperor Hadrian, who visited the city in the year 130 BC, this gate located in the middle of the city takes you from the modern times to the magical ambiance of ancient times.  Located near Kaleici, Hadrian's Gate is a majestic and beautiful gate, which attracts at first glance with marble columns carved in Corinthian style, and embossed and carved ornamentation. 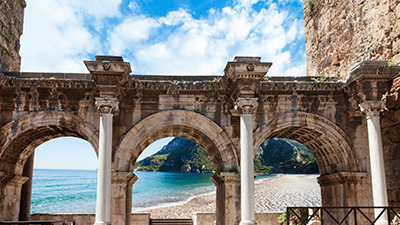 Hadrian's Gate is one the best-preserved historical structures  in Antalya. Dating back to Roman Period, this gate has not been used for long years, since the city walls enclosed it,  and survived to the present time. When the city walls were collapsed, the gate was revealed. Perhaps, Hadrian's Gate is the most attractive gate in Pamphylia region. There are three dome-shaped arches on the upside of the gate. Except for three columns, the gate was built entirely of white marble. There are two towers standing on both sides of Uc Kapilar, which impresses with the beauty of craftsmanship of embossing and carving. One of the towers was built during the period of Hadrian, while the lower parts of other tower were built in ancient times and the upper part was built during the Seljuk period.

Located at the beginning of Ataturk Street that is surrounded by palm trees on both sides in Antalya, Hadrian Gate's, which can also be called as a gate that brings together the traces remaining from ancient times with the modern age, adds beauty and value to the silhouette of the Antalya.

You just need to go the city center to get to Hadrian's Gate. Being easily visible from almost every location close the center, this gate is located at the beginning of Ataturk Street, and you can get to Kaleci when you pass through this gate. Hadrian's Gate also has a central location that anyone you ask may help you to find it.