For Adrenalin Addicts: Paragliding in Kas

A district of the province of Antalya, Kas is located west of Antalya, 187 km away from the City Center. Being the most popular stop-over of the Lycian Way, which is one of the world's longest 10 hiking trails, Kas is separated from Fethiye with Esen Stream located on the western side. It is surrounded by Elmali Village on the farthest northern side, and Demre and Ucagiz on the eastern side. The Mediterranean Sea extends alongside the southern side. Thanks to its great geographical advantages, Kas has become one of the most popular diving locations of both Turkey and the world, which makes it an ideal holiday destination during summer.

Kas is 187 km away from Antalya, lasting for 3 hours and 5 minutes.

Where to Paraglide in Kas?

During the flight, you can look down on all islands of Kas, including Meis and the Twelve Islands. You can also see the caretta caretta and the Mediterranean monk seals under the fascinating effect of the turquoise waters. Seating on the captain seat, Mr. Cenk informs you about all places you see during the flight. 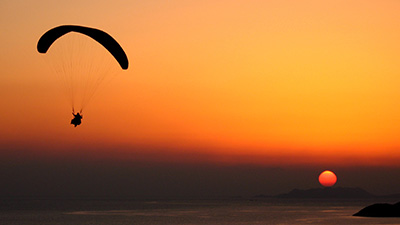 Although paragliding is like skydiving in technical terms, it is performed in a different style. This air sport requires jumping from mountains and slopes instead of just high points.

What is Necessary for Paragliding?

First, we need a parachute for paragliding. However; a parachute does not have a simple structure, contrary to the popular belief.

We can split a parachute into four main components:

Lines: Lines, with each of them having the capacity of carrying 100 kg, are separated into two or three lines as they approach to the wings, which make them stronger. They have two different types; namely suspension lines and brake lines.

Harness: Made from plastic or wood, the harness is the section where the pilot seats, and it consists of three elements. It has a back support, shoulder straps and columns for the pilot. It is possible to produce it in various forms and adjustments in line with the body size, like the wings.

Columns: Columns are the section where all lines are gathered together. They allow the pilot to check all lines at a single point during ascend and descend.

Paragliding cannot be deemed dangerous at all if all rules are observed, like the other sports activities. What matters in paragliding is to determine the ideal weather conditions for flight. Most of the accidents occur due to adverse weather conditions or during acrobatic shows. You can enjoy a quite entertaining and safe flight if you complete your flight trainings and observe the warnings to be given by your pilot.

Who Can Do Paragliding?

It is one of the essential rules to not weigh more than 100 kilograms. Unfortunately; pregnant women, patients with asthma, heart disease and epilepsy are not allowed to fly. With respect to age limit; adventurers of all ages can do Paragliding provided that they have obtained their families' consent.