Each Festival Is Richness For The Memory Of The City

Last year hosted a brave performance by “Ilk Sarkilar, Guz Sarkilari (First Songs, Fall Songs)”, poems by Serenad Bagcan and unceasing applauses. Say ended the night by these words: “I’m so happy to see such a crowded audience here tonight. I hope Akra Jazz Festival will be maintained for long years. Fazıl Say will take the stage again this year with a fascinating performance. We met with the famous pianist, defining himself as “a bridge between cultures, before his concert on June 26 that he was going to take the stage with his compositions “Truva Sonati” (Trojan Sonata) and “Izmir Suiti” (Izmir Suite).

Akra Jazz Festival attracted a great deal of attention in the first year. The audience enjoyed the synthesis of jazz music with world music that they listened to during the festival. Were you expecting this attention?

Today, and even for the last quarter century, the jazz festivals are not composed of only jazz. These festivals include pop elements and ethnic music elements, and you can see many examples of classical music. In this context, these festivals, where bridges between musics are established, attract great attention of audience. I consider these festivals organized in Antalya really important. Every new festival sticking in the memory of city creates a wide network of arts and culture. As far as I can see, the people of Antalya have owned the festival. 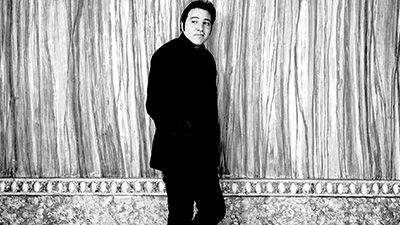 Fazıl Say is very important for Antalya. I think that Antalya is also important   for Fazıl Say as you greeted this audience with many festivals.

I love the audience and great attention of Antalya. With the motto of   “Jazz In City”, we carry music, universal values and friendship all over the   world. The festival team does something amazing at world standards. I   wish it lasts for long years.

Last year, you took the stage with Serenad Bagcan in Akra Jazz Festival. How do you consider the atmosphere of the concert?

Last year, I took the stage with my songs that I made by composing the poems of precious poets of Turkey. It was a great pleasure to take the stage with Serenad Bagcan with “Ilk Sarkilar ve Guz Sarkilari…” (First Songs, Fall Songs). I feel lucky that I worked with such an impressive performer like her. These songs, which I composed in 1994, waited for a performer for more than twenty years. I met Serenad in 2013, and we released our CD.

''We Carry Universality and Friendship''

We will see you at the stage of Akra Jazz again in June. Would you tell us about the concert program that the audience will be introduced this year?

This year, I will take the stage with a program including “Truva Sonati, Izmir Suiti” (Trojan Sonata, Izmir Suite) and my own jazz songs “Paganini Caz (Paganini Jazz) and Summertime”. We performed the world premiere of Truva Sonati (Trojan Sonata), which was requested to be composed by the Municipality of Canakkale within the scope of Year of Troy, in Cimenlik Castle in August 2018 for the first time. It was a public concert and thousands of people attended the concert. Then, I also had the opportunity to perform this work in the concerts held in many cities of Turkey and the world. I will perform it in Antalya for the first time in the festival.

The albums of “Truva Sonatı” (Trojan Sonata), which concerts attracted great attention, have also recently hit the shelves. Would please tell us about the work and album?

The “Truva Sonatı” (Trojan Sonata) is a 40-minute piano sonata consisting of 10 sections... In this work, I used various techniques including many playing methods of the 20th century stretching out to the effects of the strings of the piano, which comprise of contemporary colors. Since there are not too many musical works on the theme of Troy, I paid attention to present all the dramatic elements of this magical epic through the language of music. The section titles of the work are as follows; “Ozan anlatıyor, Homeros” Poet Tells, Homer), “Ege Ruzgarlari” (Aegean Winds), “Troya Kahramanlari” (Heroes of Troy), “Sparta” (Sparta), “Helen, Aşk” (Helen, Love), “Troya” (Troy), “Aşil”(Achilles), “Savaş” (War), “Truva Atı” (Trojan Horse) and “Son söz” (Epilogue). Apart from these, there are also form themes and leitmotifs spreading over the sections of the work. Such as the themes “Kader Aglarini Oruyor” (Destiny Is Spinning The Web), “Gece” (Night), “Menelaus”, “Paris”, “Guneş” (Sun), “Agamemnon”, “Hektor” (Hector), “Kahramanlık” (Heroic) and “Endişe” (Anxiety)... The album was first released worldwide by Warner. It met with Turkish audience in May by “Ada Muzik”.

As well as Akra Jazz Festival, you were one of the guests of the first Turkish-Russian Festival this year. How do you consider the festival?

It is a very valuable idea to invite Russian musicians and introduce them to music lovers in Side, Antalya. I think that this idea also strengthens the cultural ties between the countries. Held for the first time in Side Ancient Theater this year, the festival hosted a glorious atmosphere. Side Ancient Theater is a really magical place. Turkish and Russian audience showed great attention to the concert. I hope that the festival continues with a living and developing identity. 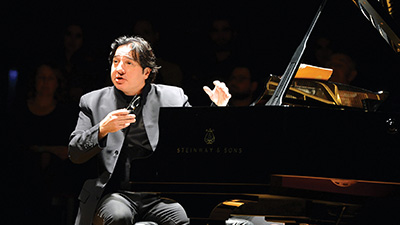 Are there any other projects that you work on recently?

I have been working busily for approximately two years on a 10-CD project that I recorded 32 sonatas of Beethoven. I just finished recording of tracks at the Mozarteum Hall in Salzburg. 32 sonatas are approximately 680 minutes. To leave behind a “reference” track to the future, music lovers, students and the world of music, I spent two years of my life, without a break or vacation, working on Beethoven’s touchstone pieces. There were days that I worked 15 hours. I went to Salzburg five times in total since June 2018 for only recording. Each time I have been to Salzburg, I stayed for three to four days, and during the 18-day recording process, we completed recording of these 10 CDs. It was a very busy pace.