''Everything Started with a Dream''

We met the legendary cyclist Gilberto Simoni, who won Giro d’Italia championship twice, at Tour of Antalya, where he came with his team. Simoni, one of the first names that comes to mind when thinking about the cycling world, answered our questions about his cycling career, his team Team Named Rocket and his future targets.

From Championship In Giro To Leadership In A Young Team

In this pleasant interview, Gilberto Simoni, one of the former Giro champions, sincerely told us how he felt about retiring after years of pedaling 800,000 km and then returning to races by leading a young team.

What do you see when you look back after a career full of achievements and medals?

I started cycling after watching a race in 1984 when Francesco Moser won the Giro. He has always been my hero. I started to participate in the races when I was 14 and became stronger day by day. It is good if others have watched the periods when I became a champion and started cycling by this excitement. This is how cycling continues. But looking back tires me. Today, I enjoy more to ride a bicycle, to watch and train those who ride bicycles. And now my son has also set his heart on this sport. In fact, he was playing football. But from this year on, he has become a cyclist. And I’m proud of it.

How did becoming a Giro champion by raising Trofeo Senza Fine act on your life?

Winning was great for sure. I became a star in the cycling world, but my life has never changed. I was as you see me now, I never changed my life. I still live my life the way I feel.

Which race comes to your mind first when you think about winning that made you the happiest?

It is Giro della Lunigiana, where I participated at the age of 18. It was the most important race of the world for young people. I won the regional race and was entitled to participate in all races in Europe. The race, which the junior world champion won this year, allowed me to dream of the Giro d’Italia as a hill-climber. You cannot win the Giro at the age of 18, but when you win, you can start dreaming of it. This was my happiest moment.

You came to Tour of Antalya, where you participate for the first time this year, with your team. What are your first impressions about races and organization?

It was a very pleasant experience for me. I would like to come also by bicycle. I was very touched to see such a beautiful organization. Such races are very tough for young cyclists. Your mind no longer works, everything depends on the legs; but if you are on that racecourse, you’re gonna dance. Moreover, Antalya is a very beautiful city. It’s great to be here and enjoy this unforgettable experience. My uncle had been in Turkey fifty years ago, while this is the first time I’ve been here. I feel emotional to be here years after his visit.

How does it feel to take the lead of a team that just began to gain experience and try to take it forward after reaching the top level in cycling career? How did you decide it?

A very young team with dreams. I expect them to like and learn cycling. I hope that it is a field which would allow them to pursue their dreams. Molinari invited me to develop my team. I’m at a position to support my team. Giving them strength also gives me strength. I met people riding bicycle at the age of 95, and got inspired. I want to ride bicycle without paying attention to the age just like they do. Not with a world record, but I want to continue this sport. 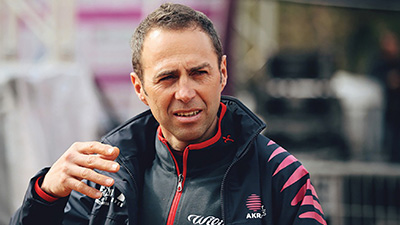 What target have you set for the future of the team?

We have very important sponsors who love cycling. In this way, we set off by challenging targets for the future of the team. I expect them to get good results in the races and increase their enthusiasm much more. Since Tour of Antalya was the first race of the year, they wanted to show themselves. But there is still a long way to go for them to compete in the real terms. If two of the competitors had not fallen in the second stage of the race, they could have ranked the second and third. The result was not very important since it was the first race. I wanted them to start and complete with happiness. And they did. The morale they gain here will be a motivation for them for the next year.

The people really enjoy watching cycle races, but how do the cyclists feel about it?

The people watching the race see only the first 30 cyclists on the screen; they don’t see what others are going through. The cyclists at the first lines are just like predators. At the lines at backer positions, there is a war of survival. When they lose their dream of winning, they also lose the strength of their legs. That’s when reaching the final line turns into a torment.

I Raced In Giro For 15 Times, In Tour For 5 Times And In Vuelta For 5 Times

As a successful cyclist, who has won many prestigious championships since the 90s, what would you recommend to new generation young cyclists?

I have ridden in 2000 races. When you divide 2000 into 365, it’s like I’ve been continuously racing for six years. I’ve pedaled 800,000 km throughout my career. I raced in Giro for 15 times, in Tour for 5 times and in Vuelta for 5 times. I can say that it is a very difficult sport and a very painful way. If they draw a number of career paths for you, it won’t work; there should be only one path. To raise to the top, they have to work continuously, without any hesitation. There is a secret to realize the dream of victory. It is to get great pleasure of this profession They need to ride the bicycle everyday with the excitement of the first day. Yes, talent is important but does not mean everything. Sometimes you also need instinct, not only experience, to win. Sometimes you look at competitors and evaluate the race; but sometimes you win without even realizing that you are the winner.