Culture and Nature of Lycian Road

Prof. Dr. Nevzat Çevik: I would like to propose presentation of Lycian Road to the world by a huge launching on the 20th of the year that it was opened to walking.

Route Of Culture And Nature

As a scientist, who has walked every spot across Lycia since 1988, researched, excavated, wrote books and made the first scientific publication by unearthing the “Road Guide Monument” called “Stadiasmus Patarensis”, which has been the first discovery in Lycian Roads, I have great interest in the project of Lycian Road.

There is a written block dating back to the period of Claudius in the incredible monument with a body over 6 meters, which I took part in the excavation works in Patara and made drawings. This block describes the Lycian Road by western, eastern and northern routes starting from the port city of Patara. It also includes the cities with their names and distances between these cities.

The walking route in the destination that is presented as Lycian Road to the tourism is 540 kilometers. The tremendous way that the nature and history meets in this culture route attracts attention. People frequently come across with ruins, trails, tombs or an ancient city at short intervals along this road. The people walking along this road  are accompanied by the sea. It is one of the best cultural routes in the world since it provides full integrity with its mountains, flora and fauna.

I would like to propose presentation of Lycian Road to the world by a huge launching on the 20th of the year that it was opened to walking. We can arrange a special walking organization for the 20th year by inviting record-breaking world champions in women’s and men’s races. Although the Lycian Road is one of the few cultural routes of the world, it has not yet reached the desired level of recognition. It has rivals such as the Mont Blanc route in Alps, the France- Italy route, and the walking paths in Central America and Peru, which have already been globally known. We have to announce the importance of the Lycian Road by highlighting its geographical and historical advantages. 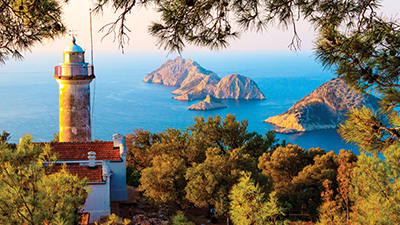 Red-White Signs Have Been Placed

In Finland, where the maintenance of cultural routes is carried out by   the state, sheds have been built at the spaces between two villages   located on the route for the purpose of allowing the people walking to r   relax. In France, NGOs work in the foreground. Both Culture Routes   Society, founded by Kate Clow, and the Ministry of Culture leaded   unearthing, registration and preservation of Lycian Road, which is the   most important cultural route among 33 cultural routes in Turkey. We recommend studies similar to those in the world with respect to the use, control and renovation of this road. The Culture Routes Society, headed by Kate Clow, has been long working on the roads stretching along the cultural, natural or historical values, and determining the symbolic routes of civilization as cultural route. It is exciting to see that this study takes place on the lands of Anatolia, which forms a path between two worlds, from East to West. Each era and each region is referred by the roads passing through it. The roads of civilizations such as Hittite, Phrygia and Lycia, nature paths such as Ararat, Kackar, Kure and Sarikamis; the paths which became meaningful by believes and people such as St.Paul, Prophet Ibrahim and Evliya Celebi actually turn into a net that eliminates time and space, even if they are private routes among themselves 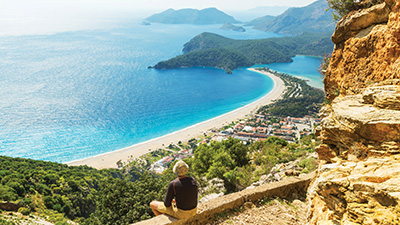 For this reason, as we move ahead on the same path, time and space change at every step, and people change.

The Lycian Road is not just project on a cultural route or a new destination for sustainable tourism. It is actually a symbolic and meaningful contribution to reunion of Turkey, which is already a part of both Asia and Europe, with its old cultural shareholders. And it also gives the message that the richness of the earth resulting from history, culture and nature is a common asset of the people living on earth and that they should be used and preserved in company with each other: it is instructive, peaceful and enjoyable.

The cultural routes project, which started with the Lycian Road and introduced by Culture Routes Society in 1999, was established and has been developed by Kate Clow with the support of the Ministry of Culture and Tourism and Garanti Bank. However, the key point of this project is to increase the union of forces by bringing Culture Routes Society together with the municipalities, non-governmental organizations such as Antalya Promotion Foundation, local organizations and institutions and to strive for protection and improvement of these values.

The borders of the countries have been changing for thousands of years, but the roads do not. Because the roads do not question the nation, color and gender of the nation passing over it. They are for everyone.

We wish that the culture routes of Turkey are approved by UNESCO and they stand on fully legal grounds and are raised to the level of operation and protection-utilization of the similar routes in Europe, and that corporate bonds with these are rapidly developed, and intense cooperation of society and the ministry is ensured.

The idea of a walking route was first introduced in the late 19th century by Jean Loiseau. In 1890, the French Camping Club supported this initiative. The first walking route of the world was marked in 1934 in Lapland, Finland. This project was carried out by the state. The real trigger was the law on paid holiday, which was introduced in France in 1936. Taking advantage of this social revolution, many French people started to search for alternative holiday experiences. The guiding sign consisting of red and white lines used as routing signs was accepted internationally in 1946.

Cultural/Natural Walking Paths, which have become increasingly popular over the years, have become to be known as a new tourism with multiple outputs such as discovery, excitement, research, sports, nature, culture, gastronomy, health. A number of walking paths such as “Romantic Road” in Germany, natural and cultural road in France (Mount Blanc) and Italy, Inca Road offering an amazing ruin and wildlife discovery in Peru, “King road” in Switzerland, “Grand Canyon” in United States”, “Petra” in Jordan, which is the most impressive cultural and natural tour of the Middle East, started to offer thousands of walkers an interesting holiday and high experience.

In Turkey, where 23 of the culture routes are found, very impressive routes such as Sarikamis, Agri Mountain, Hittite, Phrygian Valley, St.Paulus, Caria, Ephesus, Sultans, Between Two Seas, Evliya Celebi, Sufi, Anabasis, Kackarlar, Gastronomy, Istiklal, Prophet Ibrahim were formed, and they were adopted by travelers and holidaymakers in a short span of time.

The Lycian Road, the first walking route in Turkey that set an example and leaded the way for formation of these, was first opened in 1999 and now it is enriched by reaching 540 km in length. The road, designed as 29 sections, can be covered in 30-33 days on average. However, only certain sections of it can be walked. You may prefer walking by starting at Kabak, Kalkan, Kas, Demre-Beymelek, Cirali- Adrasan, Geyikbayiri and use this road as regionally. The most popular among these routes are Fethiye Oludeniz and Demre-Kekova-Kas, Gelidonya Cape-Adrasan-Olympus.

A substantial progress and great efforts have been made in the project of Lycian Road until now. We are grateful for these. I have some suggestions for following stages.