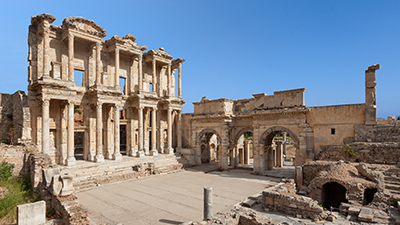 It is the two-storey arched structure that almost everyone visualizes when it comes to the Ancient City of Ephesus. Contained 14 thousand books in its time, the "Library of Celsus" still stands firmly as the most prominent symbol of Ephesus. Visited by hundreds of local and foreign tourists and history addicts every year, Ephessos, with its ancient name, was a Greek city located in Seljuk district of Izmir. Ephesus, which later gained an identity as a very important Roman city, was among twelve cities of Ionia during the Classical Greek period. Known to be dating back to Neolithic Age, around 6000 BC, Ephesus was included in the Temporary List of World Heritage by UNESCO in 1994 and registered as a World Heritage Site in 2015. 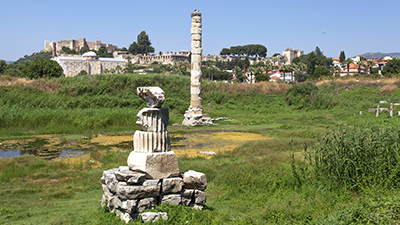 This romantic port city had a glorious life in commercial and political terms due to its strategic location where east and west meets. Ephesus was the shining star of its time in culture, science and art. It is the Temple of Artemis, one of the 7 wonders of the world that is also located in Ephesus, that has increased the interest for this place. Huge temples, philosophical academies and the famous Library of Celsus shine like a cultural pearl in the city. 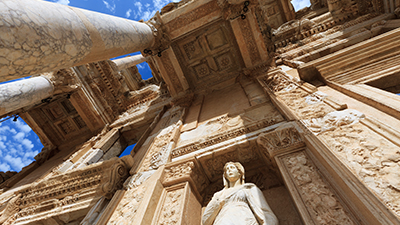 Filled with the alluvium carried by the rivers and moved away from the sea, Ephesus began to lose its commercial power and importance. Then, its magnificent days were buried in history due to the devastating earthquake. Ephesus, where there had always been settlement even though it was interrupted from time to time, is a historical heritage that was well preserved until Seljuk Period and has become a symbol with its library that still stands today. 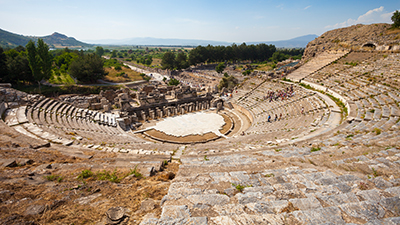 The first city that was made entirely of marble, Ephesus well preserves its position as one of the most interesting ancient sites among its contemporaries with its slope houses, ancient theater, the King's road, famous Library of Celsus and many other ruins. Existed as a city in the Neolithic, Hellenistic and Roman periods, Ephesus had its magnificent age in the Roman period. 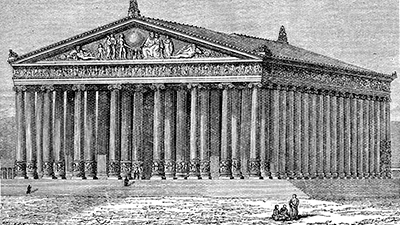 The population of Ephesus, which was the capital of the Asian Province during the period of Roman Emperor Augustus in the 1st and 2nd centuries BC, exceeded 200 thousand people. There were numerous magnificent and eye-catching monumental structures built entirely of marble in the city during this rich and magnificent period. What enriches Ephesus most is the most spectacular temple of Artemis culture rooted from the tradition of Kybele, the mother goddess that is the symbol of fertility in Anatolia. 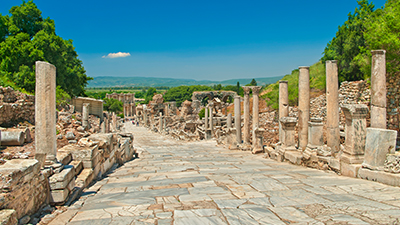 Being among the top along with Milet in art, science and culture in the 6th century BC, Ephesus has also introduced numerous artists and scientists to the history. Wise Heraclitus, the dream-interpreter Artemidoros, the poet Callinos and Hipponax, the linguist Zenodotus, the physician Soranos and Rufus are prominent figures who grew up in Ephesus and inherited in the history. 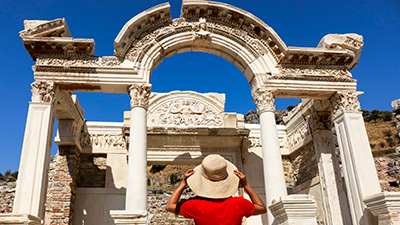 Ephesus continues to reflect generously the traces of the spectacular history with its magnificent and well-preserved marble structures. There are two gates to enter the ancient city of Ephesus, which was built in accordance with a grid plan where all avenues and streets intersect at right angles. It is necessary to spare at least 3 hours to visit the city thoroughly. Harbor Street, Church of Mary, Grand Theater, Marble Street, Library of Celsus, Curetes Street, Trajan's Fountain, Hadrian's Temple, Domitian Temple, Varius Bath, Town Hall, Odeon and Slope Houses are worth seeing as the most important structures. 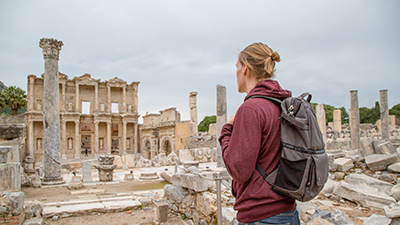 When it comes to the ancient city of Ephesus, it wouldn't be right to omit mention of the famous House of Love. The marble slab with an engraved woman's head and oil found on the Marble Street is like a billboard pointing to the House of Love located a little further ahead. It was one of the most popular and frequented places for sailors coming to Ephesus, is located at the intersection of Kuretler Street and Marble Street. There is a secret passage to enter the House of Love through the Library of Celsus and the Scholastica Bath. With mosaics depicting four seasons on its walls, the House of Love is one of the most important and famous buildings of Ephesus.

How To Get To Ephesus 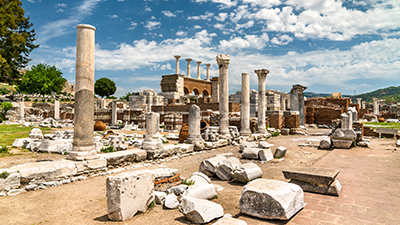 Entry Fee to the Ancient City of Ephesus

The entry fee to the Ancient City of Ephesus is 100 TL as of 2020. The museum card allows for free entry twice a year. You need to pay an extra 45 TL to see Slope Houses. Museum card is not valid for Slope Houses.