Attracting Attention with the Rock Tombs, the Ancient City of Telmessos 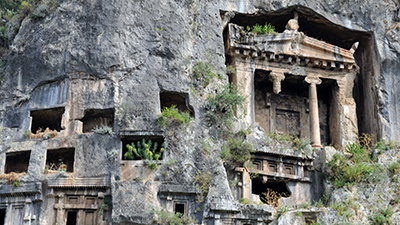 Turkey is a country that stands out with its cultural heritage and layered structure that was home to many civilizations, as well as its mountains, seas and nature. This article involves one of those civilizations, Telmessos. The ancient city of Telmessos is located in Fethiye district of the province of Mugla in the southwest of Turkey and 30 kilometers northwest of the province of Antalya. Preserving the distinction of being the first settlement in the history of the district to which it is affiliated, Telmessos is an ancient city that has preserved its value until today. 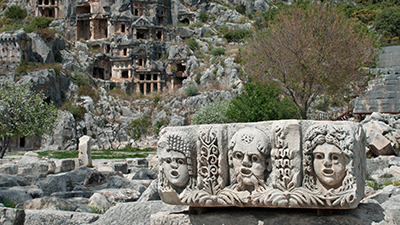 Although the meaning of the name Telmessos, which is located in the borders of Lycia and Caria, is not known exactly, the rumor has it that it was named after Telmessos, the son of Apollo. The history of the city in Telmessos, which is regarded as one of the last settlements of the Lycian Union, corresponds to the 3rd century BC. However, no evidence with respect to this century was found. Although the sources refer to two theaters, only one ancient theater has survived until today in the ancient city. It is assumed that the other theater was collapsed due to a natural disaster such as an earthquake. 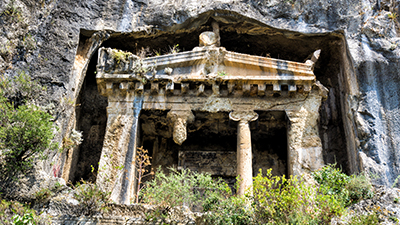 Only a few ruins including the rock tombs and a few sarcophagi have survived until now from Telmessos, which was destructed due to the earthquakes and political reasons throughout ancient times. Despite the fact that the ancient theater in Telmessos reflects the characteristics of the Hellenistic period, it actually belongs to the Roman period. The ancient theater was turned into an arena in the 3-4th century AD. The most important rock tomb is the one that is also known as the Amyntas tomb. On the eastern slope of this tomb, which has the characteristics of an Ion Temple on its facade, there is another group of rock tombs, two of which have a temple facade. 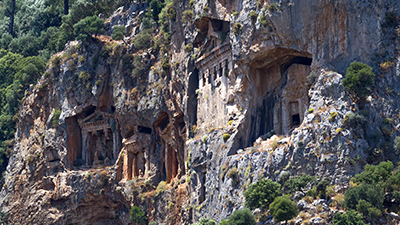 There are also the ruins of a castle built in the southern of the city in the middle age. There is no evidence of settlement in the castle. It is assumed that it was built for defense. Although only a few remains have survived until now from Telmessos, the rock tombs and sarcophagi in the city draw a great deal of attention. You can embark on an unforgettable journey in the mysterious corridors of the time by including Telmessos in your travel plan, while enjoying the sun and deep-blue sea as calm as a millpond in Fethiye.