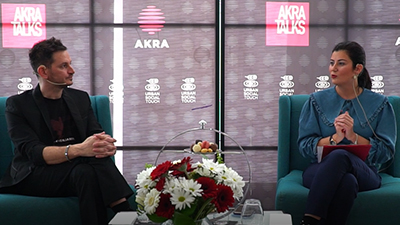 Renowned worldwide for his successful works such as "Tuesday" and "My Life Is Going On", Burak Yeter met with his fans at the 49th of Akra Talks.

Started his journey in music in Antalya, Burak Yeter said, “I always feel close to the ambiance, nature and people of Antalya. I've learned so much in this city”.

“Djing has become a profession that allows you to fill a stadium and achieve huge successes. The rapid development of technology and the ability to make music even by a smart phone are the biggest advantages it offers. However, from a different point of view, it must be known that you can understand the people better when you are face-to-face. Some DJs make music for themselves, while some DJs make music by trying to understand what people really want, and I paid attention to progress in this way. And I succeeded.”

“If necessary, let the student become the master.”

Making statements on Connection DJ Academy he founded in Istanbul 7 years ago, Burak Yeter said, “We have raised 3700 students so far. We opened the schools in Amsterdam and then in Los Angeles three years after foundation of the school in Istanbul. There are many talented musicians in our country, who have not been discovered yet. Our aim is to train them and introduce them to the world market. If necessary, let the student become the master. Because the more you share, the more you grow.”

Widely acclaimed by re-arranging “My Life Is Going On”, the theme song of the popular series that has been storming across the world, the famous DJ stated that the song received awards in 12 countries including Spain, Italy and Finland. He also stated that this version will start to be used in season 5, and that he has also made several theme music to be used in season 4, which will be released soon.

“When I was a kid, I wanted to be an astronaut so much. I am still interested in space. I think I have revealed my childhood dreams with this work. All artists have their own ways of expressing themselves. Like drawing, poem… I express myself with music. In other words, I can create a perception of “listen to my music to understand me” in people's minds without words. Space is an example to this. “

"If you know well how to reveal your feelings, and if you are good in technique, you can express yourself in every way."

“To be honest, I turn on my computer and make music on the plane. The music I make becomes a hit. I mean, you don't need good equipment. If you know well how to reveal your feelings, and if you are good in technique, you can express yourself in every way."

Stating that he is always in the pursuit of innovations, Yeter said that they had a great start with Antalya Symphony Orchestra, and that they had 7 concerts so far. He also added there will be 12 more concerts this summer.

Burak Yeter finally gave the following message to the young people who want to make music:

“If you really listen to your heart, it will take you to the right path. Everyone has his own way. Of course, the styles may merge with others or look like them. If it does not merge, it cannot develop. I stand for merging. We have to be open to joint works. The more you share, the more you grow. “

Attracted a great deal of attention of the art lovers in Antalya and the guests accommodating at the hotel, Akra Talk sended with the  Q&A session.