A Place That Amazes Everyone: Duden Waterfall 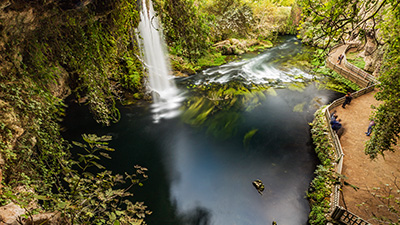 Antalya is a lively and stunning holiday resort, which makes you enjoy four seasons together and attract not only domestic, but also foreign tourists.  The blue-eyed child of Mediterranean Region, Antalya preserves many civilizations and numerous myths in its heart due to the depth of its historical roots. Its never-ending treasure has been shining for centuries in Saklikent, Konyaalti and Lara beaches, the streets of Kaleici and waterfalls. Duden waterfall is among the tourist attractions in Antalya. The ideal place for those who want to beat the scorching heat of Antalya and have picnic, Duden waterfall is one of the beautiful colors of Antalya. The source of Duden waterfall, a joyful spot which offers good time and gives pleasure by the cooling breeze and gurgling sound of the waterfall and strong energy released by the water, is Kepez Hydroelectric Power Plant, and Duden waterfall is divided into two branches while it flows down . This is why this gushing water is also referred to as Duden waterfalls. Called as Lower Duden and Upper Duden, these waterfalls are divided into two branches and flow into Mediterranean Sea. Upper Duden is known as picnic area. If you are in Antalya, you must see this natural beauty.

Duden Waterfall is located at a distance of 10 kilometers from Antalya, the city of sun, and this makes it easily accessible by many tourists. Visited by hordes of Turkish, Arabic and foreign tourists especially on hot summer days, Duden Waterfall worth its fame by its cooling and relaxing nature. At Duden waterfall, watching the waterfall flowing down from a height of 40 meters means to feel like all the negative emotions stuck in your mind flow away with water. The rehabilitating and healing power of water make you feel renewed and full of energy. Antalya Duden Waterfall captures the hearts not just by gurgling water, but also by the flora with every shade of green. It is told that Alexander the Great used to give water from Duden Waterfall to his horses while passing by here, and this is why Duden Waterfall is sometimes referred to as Alexander Waterfall. 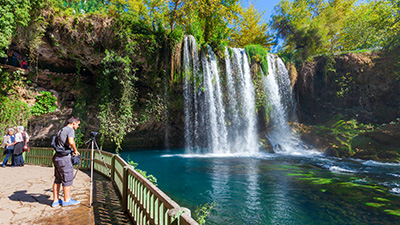 What To Do In Duden Waterfall

Duden Waterfall, being always at the top of the list of tourist attractions   in Antalya, maintains its flow rate not only in summer, but also in winter.   So, what can a visitor do here? As the fresh air will make you feel hungry,   after watching the gurgling waterfall, you can take a seat at a suitable   table to reward your appetite by the food you bring in or in one of the   restaurants, which also serve breakfast. Meat and fish restaurants,   gozleme makers, coffee-shops and bistros give color and add liveliness to   this area and keep the trading activities alive. In the restaurants, eating   while watching the icy cold water flowing under your feet at the tables placed in the verandas and pergolas, extending into the water, will be engraved in your memory as a unique pleasure. You can take a walk around the waterfall and have picnic. However,  the most frequent activity will be taking photos, as the surrounding of Duden waterfall forms a natural background to take photos or to have photos taken. You can have a wonderful day by losing the track of time in Duden waterfall, where places to chat accompanied by tea, coffee and cold drinks are also available.

If you are going to Duden Waterfall early in the day, you can have your breakfast in the places there. The breakfast you will have in these places, which serve delicious mixed breakfast and gozleme, with your loved ones accompanied by the relaxing sound of water will give you extra happiness. In addition, freshly brewed tea served in samovars will give extra pleasure.

When To Get To Duden Waterfall

Summer begins early in Antalya. The spring, when the nature begins to wake up, may be the ideal time to start visiting Duden Waterfall. The beginning of April is the ideal time. Duden Waterfall welcomes its visitors throughout the summer. Since the flow rate of the waterfall does not decrease in winter, it is a place that can be visited by those who love winter sports and nature walks.

Duden Waterfall hosts approximately 3 millions of domestic and foreign tourists every year. The cave located nearby the waterfall also attracts great attention of the visitors. It has become a tradition to watch the waterfall, which flows outside, through the caverns formed inside the cave and capture this natural beauty. The ancient rock tombs around the waterfall show that the waterfall has been gurgling and attracting attention similarly for centuries.

How To Get To Duden Waterfall

You can enter Duden Waterfall for a small fee. The cost of student ticket is lower than the regular ticket. In addition, the entrance is free for disabled people, veterans, martyrs' relatives and people over age 65.