5 Spots at the Mediterranean to Stop by For the Weekend Holidaymakers!

The unique and unpolluted beaches available at the Mediterranean coastal bank shine out as the prominent locations for the individuals making a holiday plan. Such beaches, which are popular places for both the domestic and foreign tourists, stand out with their natural beauties.  Here are 5 distinguished spots for the individuals who wish to see the perfect match of a coastal band in the arms of an endless deep blue sea and nature: 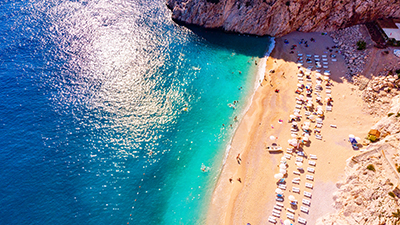 The Kaputas Beach, located at Kalkan in the district of Kas of Antalya city, is a locality that is famous for its almost-blinding beautiful scenery, in particular when viewed from heights. Kaputas, which becomes an extremely distinguished beach thanks to its crystal clear aqua, topographic structure sheltered on both sides, the texture originating at the point where the ice-cold waters coming from the deep canyon at the back join the sea, is also a grade 1 natural site area. The turquoise sea, meeting with the crystalline pebbles, makes this place more distinguished. 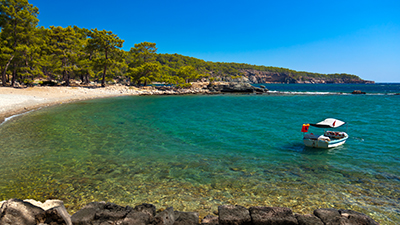 Phaselis Beaches with a distance of 12 km to the district of Kemer of Antalya city, is one of the popular places for the individuals favoring such kind of locations, thanks to its pure sea as well as its ancient ruins and also its texture that remains still natural. The three differential beaches, located at the three natural harbors of the Phaselis ancient city, add a distinct richness for the region. In particular, the Southern harbor beach is the largest and the most popular beach of Phaselis among the beaches at the Northern harbor, the Southern harbor and the Central harbor. The Southern harbor beach, which is one of the first choices of the campers, offers the endless peace of being communed with the nature to the holiday makers.

The Northern harbor beach is the second largest beach next to the ancient city. It is an intensely exclusive area for the individuals who like the beaches with the pebbles.  The clear sea and the tranquil water add a distinct particularity and tranquility for this location.

The Central harbor beach is the smallest beach of Phaselis. Since the Central harbor is surrounded with round-shaped trees and rocks encircling it, you will feel like you are in a pool while swimming here. The sea water temperature in this area is some degrees higher than those at other locations. 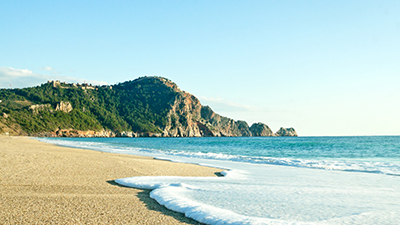 The beach, named after Cleopatra, the Queen of Egypt, is located in front of the Alanya Damlatas Cave. This beach with blue flag resembles a pool surrounded with rocks. According to the story, Cleopatra, the Queen of Egypt, and Antonius, the Roman Emperor were meeting here.  This beach is characterized by its glassy clear and unpolluted sea. In fact, the fish in a depth of 5 meters can be easily seen when you swim by wearing underwater goggles. 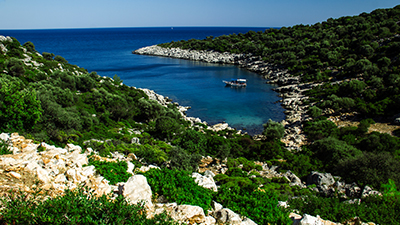 The Andrea Doria Bay, located within the borders of the district of Finike of Antalya, is a bay with a unique beauty and a popular place also for the caretta carrettas. This place can be accessed by the recreational crafts.  This area is also known as the Beacon (Radyofor) Bay. The Bay, named after the Genoese Admiral Andrea Doria, is a locality ideal for not only swimming in the chilly blue water but also enjoying the scenery that pleases the eyes. 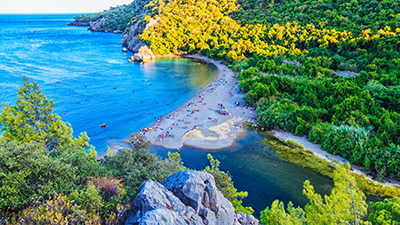 The Olympus Beach, located between the districts of Kemer and Kumluca on the western side of the city center of Antalya, is one of the most popular places for the individuals, who prefer a natural, tranquil and peaceful holiday spots, thanks to its pure sea, green and untouched nature, landscape and the topography extending to Cirali.