Side, Pomegranate-Smelling Daughter of Pamphylia

The name of Side, world-famous peninsula of Manavgat, is a relic from the language spoken in the city 3 thousand years ago.. In this local language, which is called as “Sidetic Language” by historians, the name of the city came from a sacred fruit: Pomegranate… In the just same way as Pamphylia, which also includes Side, means “multi-ethnic country”, Side made a “multi-grained fruit” the symbol for itself. As a valuable port city of Antique Age, it hid many civilizations in its bosom, from Lydia to Seljuks. The historical heritage that we come across at every step today is imprinted on our minds as a witness of time.

''From Now On, I Will Be The Symbol Of Nature And Life With My Blood Colored Fruits. Bring My Daughter Here Ever So Often. Let Her Play In My Shade And Tell Her Not To Pick Any Flowers. Not To Hurt Any Tree. Any Tree Or Flower May Be A Transformed Goddess. 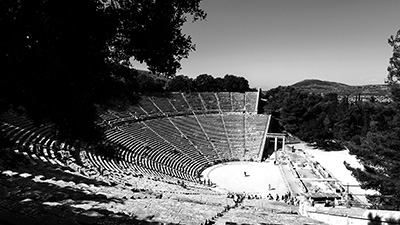 Side, Daughter Of Taurus Mountains

The ancient historian Arrianos tells that the Cyme colonists coming from the region Aliaga, Izmir forgot their own language and started to speak “Sidetic Language”, which is actually a Luwian language. Side assimilates to itself those who come to Side. It is still in this way... According to a legend told by Hekataios of Miletus, “Side is the daughter of Taurus, the mountain god of Anatolia. In other words, daughter of Taurus Mountains... Called as the goddess of nature and productivity, Side goes to Manavgat River with her daughter and Nymphs (forest fairies) to pick flowers. Amazed by the flowers of a colorful tree, Side tears off a branch to give its flowers to her daughter. In fact, this tree is a goddess who has turned into a tree for protection from evil people. Side cannot move, her feet strike root in the soil and leaves gushes from the tips of her fingers. Nymphs feel very upset about it and cry. They soak with their tears the feet of Side, which stroke root in the soil. The Goddess Side says, “From now on, I will be the symbol of nature and life with my blood colored fruits. Bring my daughter here ever so often. Let her play in my shade and tell her not to pick any flowers. Not to hurt any tree. Any tree or flower may be a transformed goddess.

The chief goddess of Side was Athena, and the chief god was Apollo. Side was a cosmopolitan seaport. Temples were built for gods and goddesses such as Dionysus, Tyce, Aphrodite, Ares, Asclepius, Hegaia, Harites (Three Beauties), Demeter, Hermes and God of Moon, Men in Side, which embraced a wide range of cultures and believes. However, Apollo and Athena were always on the top. Today, the Temple of Apollo and the Temple of Athena right next to it, which is located in front of the ancient port and where everyone visiting Side take photographs, are the witnesses survived until now. The home of polytheistic religions, Side also hosted Jews and Christians in later ages. With adoption of Christianity by Rome, Side became the first bishopric of Pamphylia region. With the Roman period, it became the center of trade.

Weakened by the Arabic invasions, pillaging by Rhodes, Venice and Genoese pirates and the attacks of the kings of Cyprus starting from the 7th century BC, Side was completely abandoned as from the 12th century. Due to the fact that people moved to the center of Antalya, it was started to be called as “Old Antalya”. This silence continued until the end of the 19th century when Cretan migrants settled in the region. Cretan migrants, who settled in Side, named the city as Selimiye. By the excavations initiated by the famous archaeologist Arif Mufid Mansel, ancient Side started to show up in the history again in its all glory.

The entrance to Side is through the main gate of land walls surrounding the city, which dates back to the 2nd century BC. The monumental fountain with three big niches, which is located at the opposite of this gate, is called “Nine Fountains” as it has nine grooves. Intensive restoration activities have been carried out since 2004 under the sponsorship of Barut Hotels in order to ensure that the ponds, gargoyles, Medusa heads in the friezes and the columns surrounding the fountain, which was the most attractive fountain of Anatolia and Pamphylia in the past, to reach water again. Studies in the historical field are conducted in accordance with the opinions of the scientific committee formed under the chairmanship of Prof. Dr. Hüseyin Alanyalı, the head of Side Excavation, and a faculty member of the Department of Archeology at Anadolu University. The monumental fountain will be restored in all its glory when works being conducted by paying great attention and use of fully original materials are completed.

All Roads Lead You To The Port In Side

Right next to the fountain, two roads with columns are waiting for you. The main road with columns, where small shops, agora, theater, Turkish bath and houses are located on the side, leads you to the ancient port. The second road starts from the left side of the fountain and ends in the port and temples. In other words, all roads lead you to the port in Side. Vespasian Fountain will be the first structure you will come up with after you pass the main gate and the monumental fountain. The arch with a height of 15 meters, which is located near the Vespasianus Fountain at the narrowest point of the peninsula, is one of the rare structures that survived in all its glory.

Precious Theatre Of Side 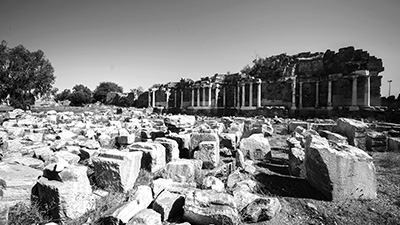 The precious theater of Side welcomes those who pass through this arch. The theater, which dates back to the 2nd century A.D., has a height of 20 meters and capacity of 15 thousand people. While all other ancient theaters were built on the hillside, Side Ancient Theater stands on the arches. It is also similar to famous Colosseum in Rome in terms of its architecture. The orchestra is surrounded by railings for the gladiator and wild animal fights in Roman period. Used for Christian religious ceremonies in the Byzantine period, the theater attracts attention with its rich architectural decorations.

Rich Collection Of The Museum

Turkish bath, located right next to the theater, today serves as Side Museum. The yard of Side Museum, which has a very rich collection that were all unearthed during archaeological excavations in the region, faces to wonderful view of Mediterranean sea and a lovely beach. Another structure around the theater is the Temple of Dionysus. Dating back to the early Roman period, the Temple of Dionysus is located adjacent to Vespasian Monument. Excavations are still going on in the agora located in front of the theater. The road with columns, which lies near the monumental fountain, leads you to the Gymnasium. The temple of Tyche (Goddess of Luck) is located between the Gymnasium and the theater. 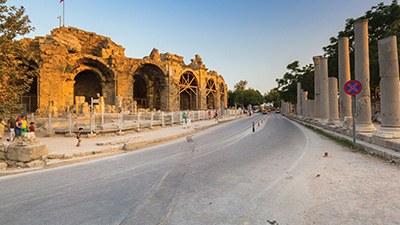 Apollon, Symbol Of Side

Although the symbol of the city is “pomegranate”, the most famous symbol, which is identified with the peninsula, is the Temple of Apollo. Apollo is the god of music, fine arts, light and the sun. The people of Side, built a poetic temple, that is worthy of Apollo, whose anger was terrifying, and who offered prophecies to the people of that age. The temple has been restored and has survived until today with five columns and Corinthian heads. The Temple of Apollo, as well as the temple located right next to it and dedicated to Athena, are truly historical heritages. In Side, where people believed in Mother of Gods-Kybele and God of Moon-Men, ruins of the temple dedicated to Men still remain.