Mardin; The City That Fascinates by Its Rich Culture and Deep-Rooted History 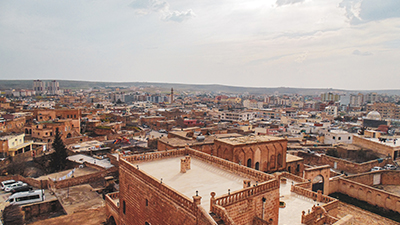 Narrow streets connected to each other by stairs made of stone, houses standing shoulder to shoulder with shadows not falling on each other, a city stretching out to the plain in terrace sets, and a mysterious and impressing geography where the sounds of church bells and the adhan mesh together. Mardin, one of the most attractive cities of not only Southeastern Anatolia, but also Turkey, is a must-visit land with its unique architectural texture and rich cultural structure. Located on the Silk Road route, the city is full of buildings regarded as cultural heritage and taken under protection. 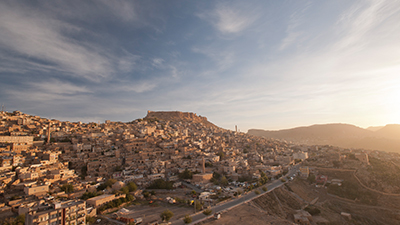 Situated between Tigris and Euphrates rivers, Mardin is also the 26th most populated city of Turkey. The sources indicate that the history of Mardin, one of the oldest cities in Mesopotamia, dates back to three thousand years ago. The ruins from Paleolithic, Neolithic, Chalcolithic,  Bronze and Iron Age in the city prove how deep the roots of this place are. 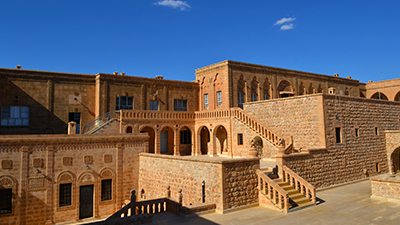 The houses look like stacked on top of each other due to the inherent location of Mardin. Situated on southern slope of Mazi Mountain, Mardin is one of the most authentic and unique cities in Turkey with its architecture, as well as its rich and colorful culture. One of the details that makes this city special and unique is the fact that the shadows of the houses do not fall on each other. Being one of the popular cultural tourism cities, Mardin always maintains its charm with its characteristic of hosting the greatest number of mosques, churches, madrasahs, tombs and other architectural elements together.  Let's have a look at where you can visit and see in this city that has deep cultural roots ...

Ulu Mosque is on the top of the list of must-see spots in Mardin. As one of the two minarets, built in the 12th century according to the inscription on the gate, was destroyed during the Mongol attacks, only one of the minarets of Ulu Mosque has survived. The Noble Beard (Sakal-ı Serif) of Prophet Muhammad is also exhibited in the Ulu Mosque, which bears the influences of Artuklu period. Drawing attention with its unique architecture of the entrance gates, Latifiye Mosque is also a must-visit mosque that bears the traces of Artuklu period. 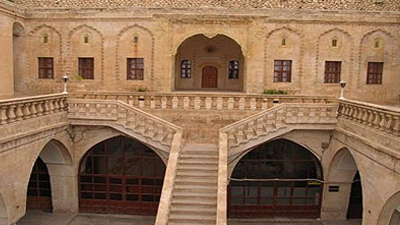 Mardin is such a photogenic city that the photos of almost every corner of this city must be captured. One of the best locations to capture photos in Mardin is Practice Hotel, which is known as the PTT Building. The building, which was once the house of a well-established family and then served as PTT, currently serves as Practice Hotel of Artuklu University. On the upper floor of the building, you can both enjoy the vast view and capture beautiful photos. 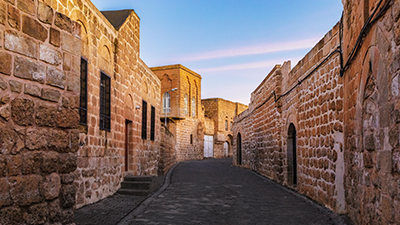 The cobblestone streets are so charming that you will want to get lost intentionally while walking… These streets, which are so narrow that that two people cannot walk side by side, make you feel like you are wandering through the labyrinths of a different world.

Historical Mardin houses are the architectural structures that attract attention of both local and foreign tourists and make Mardin "Mardin". Built by using yellow limestone, these houses are cool even on the hottest days of the summer due to the nature of the material. It is likely that you will be lost in time while wandering through Mardin houses that are almost like an open-air museum. 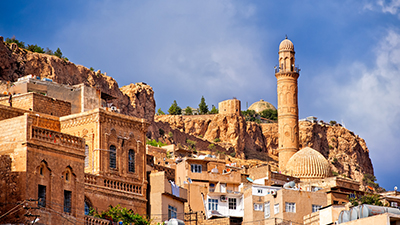 Beside these buildings, Mardin Museum, Midyat State Guest House, Mansion of Haci Sehmus Mete Mansion, Kayseriye Bazaar, Revakl, Bazaar, Bakircilar Bazaar, Cumhuriyet Square, Beyazsu, Turabdin Plateau, caves, hot springs and Turkish baths are also worth seeing. Mardin is a city that really makes you feel the layered texture of history at every step you take. If you visit this city, we recommend you to empty the storage of your camera, because you will definitely want to take photos of every angle, every corner and every detail.