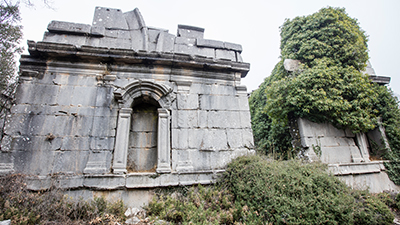 Bearing the traces of civilizations in layers, which whisper quietly the history, the Anatolian lands probably derive their real value from this feature. Termessos is one of the best preserved ancient cities in Anatolia, which hosted numerous civilizations. Located on the Korkuteli road, 30 kilometers northwest of the city center of Antalya, the Ancient City of Termessos Ancient City, was built on the foothills of Gulluk Mountain with an altitude of 1665 meters. With a peaceful and calm look, Termessos has become a sort of hidden city due to the dense vegetation and pine forests surrounding it. 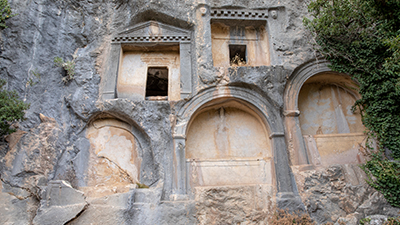 The name Termessos was first mentioned in Iliad of the famous poet Homer. An ancient Greek hero was commissioned by a Lycian King to conquer Termessos, and thus the name Termessos appeared on the stage of history. The Greek hero surrounded the city by flying over the city by his winged horse Pegasus and throwing stones over the inhabitants. It was Alexander the Great who first wanted to capture Termessos in 333 BC. Having a natural defense system since it was built on the foothills, the city resisted the siege of Alexander and did not surrender. It is known that Termessos, which was taken by Ptolemies after the death of Alexander, was an independent city as evidenced by the coins of the city. 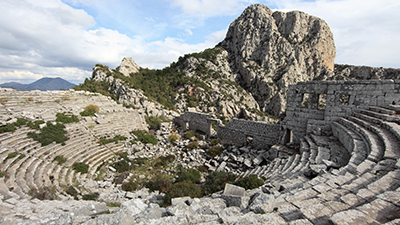 It can be easily said that the main reason why Termessos has been well-preserved and has survived until today is that it is located at a high altitude and surrounded by forests. This ancient city has survived until now in a good condition with the exception of minor deformations caused by earthquakes and climatic reasons. There are many temples and cemeteries in Termessos. What reinforces its historical reality is that the tomb of Alcetas, one of the famous commanders in the period of Alexander the Great, is also located here. In the ancient city where numerous monumental tombs are located, the sarcophagus decorated with shield motifs draws a great deal of attention. 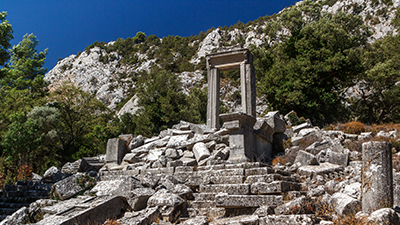 Being exhibited in Sarcophagi Hall of Antalya Museum today, the "Dog Sarcophagus" is one of the interesting and striking works in Termessos. The inscription written by the owner for his dog "Stefanos" makes the sarcophagus unique and special. The ruins at the archaeological site of Termessos start from the wall dating back to Hellenistic Period on Korkuteli-Antalya Highway and continue until the peaks of Gulluk Mountain. The path starting at the entrance of the archaeological site continues until the temple built in the Hadrian period. With Gymnasium built with too many rooms, the columned street located southwest of Gymnasium, the shops located in the columned street alleys, the drainage and sewage system of the city, and the cisterns which enabled collection of rainwater, Termessos proves that it was one of the strong and comfortable cities of its time. 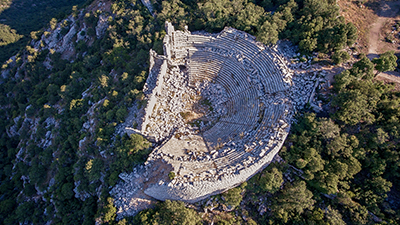 The ancient theater located on the eastern slope of the agora is worth seeing with its view over the Gulf of Antalya. The parliament building and interlocking cisterns in the southwest of the theater demonstrate how impressive the architectural conception is. The ruins of Roman villa in the southwest of the city are also just one of the worth-seeing spots in the ancient city. You should also visit the hot springs of Termessos while you are here. With its rich and dense vegetation, various animal species in the forest, well-preserved structure and special architecture, the Ancient City of Termessos is a must-see historical site for history enthusiasts and for those who visit Antalya. The Ancient City of Termessos can be visited seven days a week. It is closed until 13:00 on the first day of religious holidays, and a small entrance fee is charged. 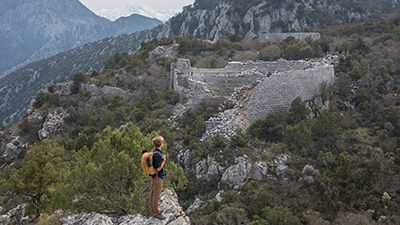 How To Get To The Ancient City of Termessos

Those coming to archaeological site of Termessos located in the national park of Antalya Gulluk Mountain by self-drive can get to this location in 45 minutes from the city center. There is no public transportation from Antalya to Termessos. If you are not going to self-drive, you can take an Antalya-Korkuteli minibus, get off at the junction of Termessos, and hitchhike on the 9-kilometer narrow road to Termessos. We believe that this ancient city, which even could not be besieged by Alexander the Great, worths all the effort made for this journey.