5 Must-Know Facts About the Ancient City of Myra

Civilizations, which had place on the stage of history and left evident traces on the lands they were rooted, appeal to both hearts and eyes. The ruins of civilizations, dating back to centuries or even thousands of years ago, in every layer of our country's lands are what add tourism value to this region. When this historical richness is combined with the blue sea and green nature, it offers both a visual feast and a boom in tourism industry…

Myra is one of the corners of paradise in our country, which has a rich and huge cultural heritage from past. One of the ancient Lycian cities, Myra is located in Demre district of Antalya. The first city was founded in the 5th century BC in the acropolis, which means "high city". The ancient city of Myra, which had a magnificent and splendid reputation throughout the Middle Ages, owes this justified reputation to the bishopric of St. Nicholas.  Built on rock tombs, the Ancient City of Myra expanded downwards over time.  What come to mind when you hear the word Myra is firstly the rock tombs, and then the St. Nicholas Church. The church was destroyed in 1034 as a result of Arab attacks. The southern theater and the amazingly beautiful rock tombs have survived to the present time since ancient Myra. The rock tombs on both sides of the city have a great architecture and a breathtakingly beautiful attraction. There are walls dating back to Hellenistic and Roman periods on the top. The Ancient City of Myra, which was also the capital city of Lycia for a while, is a richness that must be seen by those who visit Antalya. 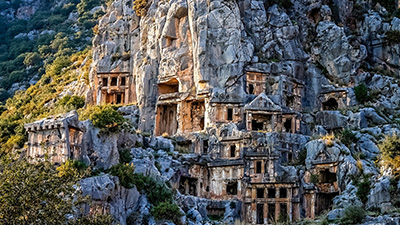 Considering that the theater, in ancient times, was the most important cultural   and entertainment activity, as well as an activity for gathering together, the   main elements of the ancient cities were theaters. Many of the magnificent   theaters with high number of stairs and acoustic properties have succeeded to   survive to the present day. The ancient theater in Myra was built in Roman   style in the south of the acropolis, and was well preserved. The presence of   block pieces and columns of fine workmanship in the orchestra section of the   theater, the stage building of which is in largely good condition and which   consisted of 14 stairways, makes the ambiance enchanting. The reliefs, on   which the gods and goddesses of the mythology, complicated creatures and mysterious stories are represented, and the theater masks are embroidered on the marble blocks on the front of the seating line.

The Ancient City of Myra is, undoubtedly, characterized with temple- and house-type rock tombs specific to Lycia. The rock tombs, which reflect a magnificent architecture and deep-rooted history when looked across and amaze everyone by fine workmanship, are carved into the slopes of the acropolis. They consist of two groups called as the Sea Necropolis in the south west of the acropolis, and the River Necropolis in the south east of the acropolis. The sizes of the rock tombs, which were built in the form of a wooden house in Lycian style, vary. The real-sized human figures on the tombs, which were made by relief technique, amaze everyone. It is possible to name these fascinating artifacts, which are also called as Tombs with Figures, as the most magnificent monumental tombs in Lycia.

Artemis, the mother goddess of Myra, was also depicted as Kybele, who is known as the oldest goddess rooted in Anatolia, and this makes ancient Myra more charming.

The presence of traces of St. Paul in Myra, which was the capital city of Lycia in the 5th century AD, makes it a special place for the Christian sphere.

With breathtakingly beautiful rock tombs carved into rock with patience and superior workmanship, the Roman amphitheater and the St. Nicholas (Santa Claus) church dating back to Byzantine period, Myra is like a messenger that brings the unique characteristics of the ancient times to the present.

The ancient city of Myra, a very special region that must be visited by those who prefer the warm and deep blue water of Mediterranean Sea, especially the city of Antalya, to swim, offers the privilege of witnessing the traces of a life that has been far beyond centuries.

1- The ancient city of Myra is one of the most important cities of Lycia, the country of lights.

2- It is famous for Saint Nicholas church and rock tombs.

3- Saint Nicholas, also known as Santa Clause, is referred to as the symbol of the city.

4- There had been a big earthquake and the city was rebuilt by the supports of I.Justinianos.

5- The theater with a capacity of 15 thousand people is one of the biggest theaters in Anatolia.

After listing 5 must-know facts about Myra, let's check how to get there.

How To Get To The Ancient City of Myra?

To get to the ancient coastal city of Myra, which is famous for the rock tombs carved on the rocks by fine workmanship and which can be included in the list of must-see places before you die, you can go to Demre by buses to Demre, which take off from Antalya Bus Terminal, and then arrive at the ancient city by your own vehicle or taxi.

You can also use public transport vehicles, which go to close vicinities of Myra.